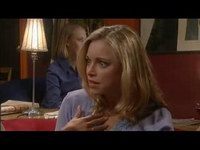 Как смотреть видео
[tab:Текст]
We can work on your problems.

I can’t believe you!
I didn’t mean to hurt your feelings.
I just never thought it’s a relationship as such.
I just thought we’re having a bit of fun, a bit of sex.
Ah, yeah.
That’s what I thought. I mean, that’s pretty much, pretty much the way I see things…
– Well, you’re alright?
– Yeah.
I mean, it’s not as if we’ve been faithful or anything.
Oooops!

hurt – причинять боль
feelings – чувства
as such – по существу; собственно
not (…) as such – [spoken] used to say that the word you are using to describe something is not exactly correct: (не … как таковой)
There isn’t a garden as such, just a little vegetable patch.
pretty well/much – almost completely: (почти)
They’re all pretty much the same.
faithful – верный, преданный
a faithful friend

solo flight – (досл. одиночный полет) the act of doing something alone, though not necessarily while in the air.

Look, I’m not saying it wasn’t good.
I’m just saying it didn’t seem like a week’s worth (этого не хватает на неделю).
No. Don’t look like that.
Not everyone has my level of sex drive.
– I mean, for start, you’re a bloke…
– All right! All right.
I wasn’t gonna say anything, but actually, I’ve been seeing someone else, too.

ten minutes’ worth/a week’s worth etc of something – something that takes ten minutes, a week etc to happen, do, or use:
We had only three days’ worth of food left.
Из другого словаря:
Worth combines with time expressions, so you can use worth when you are saying how long an amount of something will last. For example, a week’s worth of food is the amount of food that will last you for a week.
bloke – [informal] a man (парень):
He’s a nice bloke.

cheat on somebody [phrasal verb] – to be unfaithful to your husband, wife, or sexual partner by secretly having sex with someone else (изменять).

Do you know what I’m going to do?
I’m gonna walk out of here.
Whether you accept it or not,
I’ll never speak to you or see you again.
That is it. Over.
– Steve, we just …
– Don’t, Don’t, Don’t!
Stop suggesting things, or telling me what you are wearing,
or doing anything with your breasts.
Going.

You’ve been cheating on me?
Form: [has/have + been + present participle]
We can use the present perfect continuous to:
1. talk about an activity which started in the past and is still going on now:

He has been working here for three years. He started working in McCarthy’s in 2003 and now (in 2006) he’s still working there.
She‘s been living in London since 2000.

2. talk about a past activity which has a result in the present:

Have you been decorating? Your clothes are covered in paint!
He‘s been working all day so he is tired now.

The verb ‘to be’ is, in most cases, what we call a stative verb. These are verbs which refer to states rather than actions, and are hardly ever used in continuous (progressive) verb forms.
I am sad at the moment (NOT I am being sad …)

However, some verbs that are usually stative can be used in continuous verb forms when they have certain meanings. Be is one of these verbs.

The following sentences are correct because be is used to describe an action and not a state:
The children are being very naughty (= They are doing naughty things)
He was being careless (= He was doing something carelessly)