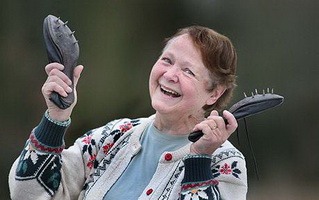 As a 17 year old, she was the Nottinghamshire County Schools 100 yards champion and qualified for the final of All England Schools Championship in Ashington, Northumberland.

Her latest unscheduled sprint was from the car park of the Duchess Theatre, in Long Eaton, Derbyshire.

She had stopped to ask the three girls, who were aged around 15 or 16, if they knew the way and they insisted on getting into the car to take her there.

When they arrived one of the girls asked for 20 pence and Mrs Hirst realised her bag had suddenly disappeared with one of the back seat passengers who was calling for the others to go with her.

“Then she started running and that’s when the fun began. I was not as out of breath as I thought I would be at my age,” she said.

When Mrs Hirst returned to the car, the other girls apologised for their friend’s actions and she decided against calling the police.

She added: “I just told them to choose their friends more carefully. There was no way I could detain them and at the end of the day I was just glad I had my bag back.”

Mrs Hirst, who has two grown up children, was later rebuked by her daughter who told her the girl could have had a knife or turned aggressive.

She added: “I didn’t think of my safety, but I did pay for it a little the next day. I was covered in aches and pains and my daughter turned to me and said it was because I didn’t warm up properly.”