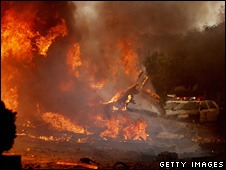 «I did not notice billowing black smoke from the engines or anything, however there were some noticeable fumes, which I originally just thought was exhaust,» he said.

billow – if a cloud or smoke billows, it rises in a round mass (взыматься, клубиться)
There was smoke billowing out of the windows.
fumes – гарь, газ, дым, пар (strong-smelling gas or smoke that is unpleasant to breathe in)
exhaust – выхлопной (the gas produced when an engine is working):
exhaust fumes

«I did not realise until about 40 minutes later, on my way back to work, that they jet had actually crashed… barely missing the local high school.»

barely – едва
She was barely aware of his presence.

Donny James, who was visiting the area, said the jet had «spiralled out of control, just like out of Top Gun» before coming down.

spiral – двигаться по спирали
out of – из
The keys must have fallen out of my pocket.
Someone had torn several pages out of her diary.

He said he was unable to get closer to the scene because two houses were on fire. One was destroyed and another was badly damaged, he added.

«Both houses were totally engulfed in flames. I saw a pilot walking around and he was dazed. The police were telling everyone to get out of the way,» Mr James told CNN.

engulf – поглощать, захлестнуть (to completely surround or cover something):
The building was engulfed in flames.
flame – огонь, пламя
walk around – бродить
dazed – ошеломленный (unable to think clearly, especially because of a shock, accident etc):
Dazed survivors staggered from the wreckage.
get out of the way – уйти с дороги, не мешать

Debris from the aircraft, including one of its engines, is strewn around the neighbourhood, reports say. Officials have urged anybody who finds any parts to leave them and report them to authorities.

debris – обломки, осколки (the pieces of something that are left after it has been destroyed in an accident, explosion etc):
She was hit by flying debris from the blast.
strew /stru:/ ; strewed ; strewn /stru:n/ or strewed – разбрасывать, заваливать (to scatter things around a large area)
The street was strewn with broken glass.
the neighbourhood – соседство (the area around you or around a particular place, or the people who live there):
Be quiet! You’ll wake up the whole neighbourhood!
urge – настоятельно советовать (to strongly suggest that someone does something)
I got a note from Moira urging me to get in touch.

Witnesses said the pilot had landed in a tree close to the crash site. He was later taken to Balboa Naval Hospital with injuries, officials said.

The BBC’s Rajesh Mirchandani in Los Angeles says there have been concerns voiced by local people in the past about the frequency of flights by military aircraft over residential areas in California.

concerns – опасения, озабоченность
The recent rise in crime is a matter of considerable public concern.
voice -выражать, высказывать
The senator voiced concern at how minorities and immigrants are treated in California.